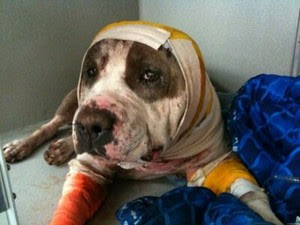 Many people mistakenly believe that all pit bulls are vicious killers -- born to fight and kill. They choose to believe that, given the opportunity, these dogs will be eager to enter a fray, happy to draw blood.

Dogs are individuals, much like people. Some people are bad, some people are good. Circumstances can greatly shape behavior. With dogs, bad ownership frequently shapes the negative, dangerous behavior that is all too often published in the media. Meet Sweetie, a 3-year-old pit bull that was brutally attacked by four other dogs.
A dog that, despite being brutally ripped apart, never once tried to fight back. According to individuals that witnessed the attack, the other four dogs were completely unscathed. Sweetie literally did nothing to protect herself from the vicious onslaught. Sweetie is a pit bull and Sweetie is a victim.

Last night, Rica, a well-known rescuer in the Tuscon, AZ area, received a frantic phone call about Sweetie. She went to Sweetie's home and was astonished to see the young dog covered in blood. 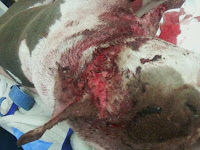 Sweetie's owners did not have the funds to get the medical care necessary to save Sweetie's life and they surrendered ownership to Rica and the
Smiling Dog Rescue.

Rica rushed the bleeding dog to Valley Animal Hospital where it was discovered that Sweetie's trachea was severed in two places. One rip was clean and could be surgically repaired -- the other would require more extensive surgery.

Before Sweetie was rushed into surgery, Rica bent down and kissed the battered dog on her nose ... Sweetie's resposne? A thumping tail of gratitude.

As of this afternoon, the entire veterinary staff is focused on one thing -- keeping Sweetie alive. Her wounds are so great that her body is in shock. She is bleeding profusely and has been placed in an oxygen tent. All surgeries are currently on hold as the staff waits for Sweetie to stabilize. Despite her horrific wounds, Sweetie is displaying an extraordinary will to survive.

Rica and the
Smiling Dog Rescue
are willing to fight with Sweetie -- they know that she is a special dog that is worth saving.

A Chip-In link has been set up for Sweetie's enormous medical expenses. Concerned readers can click here to donate, or they can make a donation directly to Valley Animal Hospital, located at 4984 E. 22nd Street, Tuscon, AZ 85711, (520) 748-0331. Donors are asked to reference the Smiling Dog Rescue and Sweetie if they phone or mail in a donation.

Update on Sweetie, pit bull who was attacked by 4 other dogs

Sweetie is a fighter. Not the type of fighter that people instinctively think of when they see a brutalized photo of a pit bull.

Sweetie was not involved in a dogfighting ring. She was not a bait dog, nor a dog forced to fight others. Sweetie is a 3-year-old pit bull who was savagely attacked by four other dogs earlier this week. 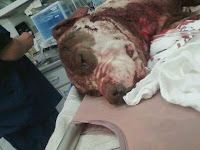 Sweetie was the victim in this attack and the young, strong dog did not fight back. Since the time of her attack, Sweetie has been in a fight for her life.

Many readers read Sweetie's story with shock, horror and concern. Many readers were touched by the gentle dog's story and many donated to her mountain of medical expenses.

This morning, an update on her condition for those dog-loving individuals who care about what happens to this lovely dog, fighting for her life.

According to the
Smiling Dog Rescue,
Sweetie has stabilized. She made it through surgeries to repair her ripped trachea, and remove her ears. Sweetie remains in an oxygen tent and her body is covered in bandages and drains, but she is improving.

Sweetie remains at the Valley Animal Hospital, comforted by caring vet staff and pain control medication. Smiling Dog Rescue has received word that the wounded dog may be able to leave the vet hospital within the week -- at that time, she will enter foster care for the remainder of her recovery.

A few readers of Sweetie's original story expressed concern about donations for Sweetie's medical expenses. A chip-in link has been established for Sweetie's enormous medical bill, however, concerned donors can also make a donation directly to the vet clinic that is caring for Sweetie.

It appears that Sweetie's determination to live will overcome the massive injuries that she sustained. Her fighting spirit, combined with the dedication of the Valley Animal Hospital vet staff, will pull her through.

Her veterinary surgeon, Dr. Moreno, has stated that this is the worst case that she has ever seen. Sweetie's will to survive is nothing short of amazing.

Thank you to everyone who has helped to circulate Sweetie's story, donated to her recovery, and sent good wishes her way.

If you are interested in receiving future dog-related articles, including news, tips and advice, please click the Subscribe icon. It's free and anonymous. Thank you for reading and thank you for sharing this article with others.


If you have a story idea that you would like to share, please email me directly at Eims1@live.com.

This story breaks my heart and I am currently balling my eyes out; that poor baby dog. She looks so sweet and loving. The pictures are horrific; I can't even imagine what she is going through. I hope she recovers as the doctors expect she will. I will think about her often. Seldom do I hear of pit bulls being attacked, mostly because the media chooses not to report such incidents. This poor dog is living proof that not every dog of this breed is a savage killing machine. I will email this article to everyone I know in hopes it will make its way around in an effort to show people that any dog can be victimized. Best wishes in your recovery, Sweetie! You are a special little dog!